2018 was ended with the most massive basketball tournament in Lithuania „Xiaomi Christmas Cup 2018“ to win Kaunas district Mayor‘s cup!

There were 34 teams in four age groups – boys born in 2003, 2005, 2007 and 2008.  Guests from Poland, Slovenia, Latvia, Estonia, Russia, Belarus, Sweden and Germany came to test their strength against Lithuanian teams.

Organizers of tournament are especially grateful to Kaunas District Municipality for the opportunity to organize the event in the sports centers of Ringaudai Primary School and Garliava Sports Center, as well as for the prizes  and awards to the winners.

Russians triumphed in the group 2008

All teams were divided into two subgroups. Teams that took first two places continued to fight for medals, loosers left to fight for 5 – 8 places. Moscow Trinta and Riga DSN played in the first semifinal, Tornado KM – “Xiaomi” and Sostinės KM – “Panteros” played in the other semifinal. After loosing semifinals, Riga DSN and Sostinės KM – “Panteros” played for bronze medals. After quite easy match guests from Vilnius celebrated victory. Tornado KM – Xiaomi with coach Aivaras Grigaliūnas and Trinta Moscow played the final game. In the group game boys of “Tornado” KM lost game in 19 points, but in the final game they all the time were few points behind Russians. Unfortunately, Tornado KM – “Xiaomi” failed to overtake opponents and Trinta Moscow celebrated victory by result 42:48. 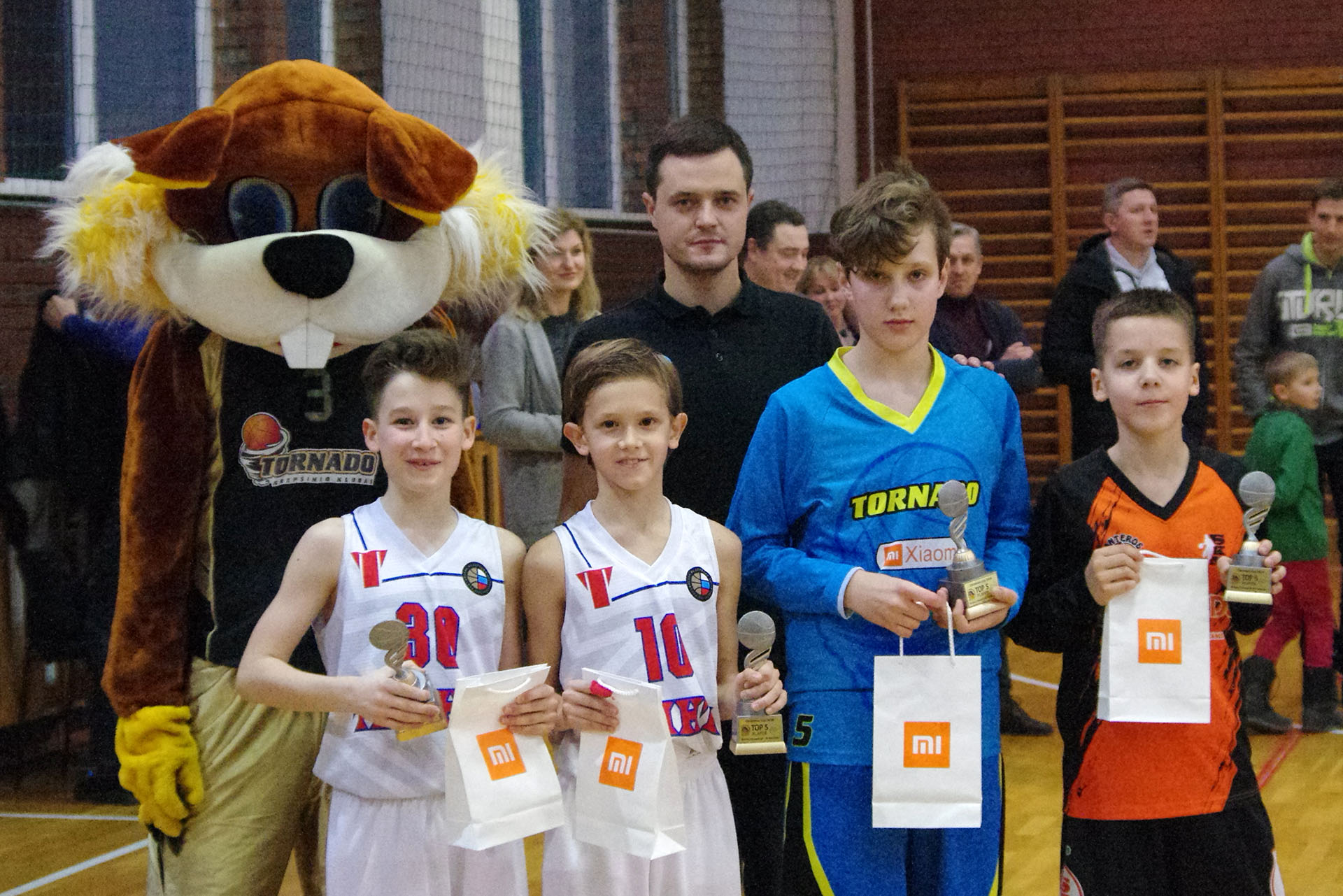 The champion title went to the Klaipėda in group 2007! 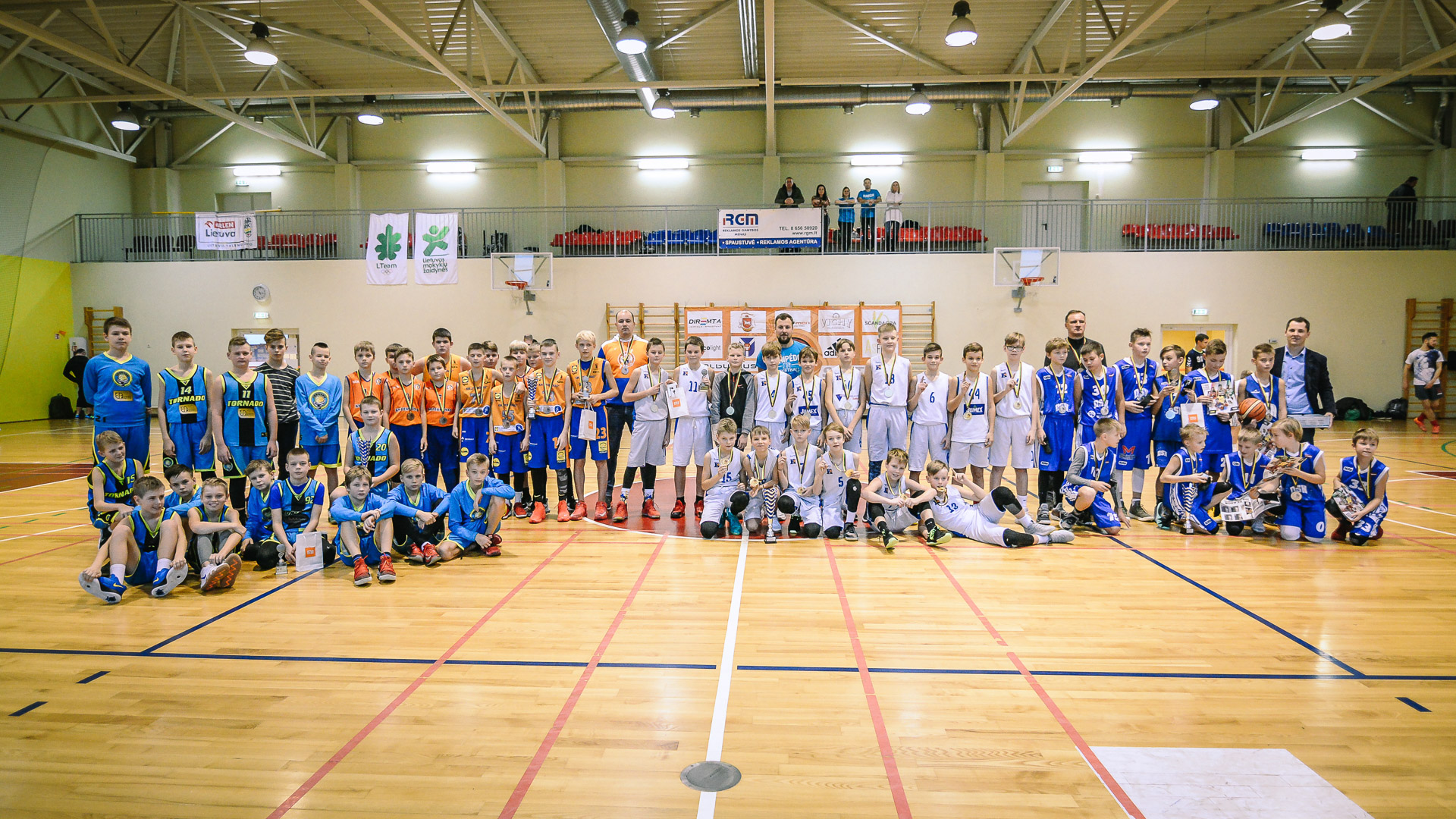 10 teams participated in the group 2007. There were Lithuanians  Tornado KM – 2007, KM „Perkūnas“ ir V. Knašiaus KM and guests from  Slovenia Krvavec, Estonians KK Viimsi/Estover, Latvians Marupes SC, Riga DSN and Talsi SS, Poles MKS Pruszkow and Belarusians Tsmoki Minsk. All the teams were divided into two subgroups. They played 4 games each and then, teams that won first places in the subgroups went to final game, teams that won second places played for bronze medals. V. Knašiaus KM team won all the games in subgroup and came to the final game very easily. Three teams scored the same number of tournament points, and counted the number of points scored and missed, the first place went to Riga’s DSN basketball players. Tornado KM – 2007 (coach Tomas Rakauskas) and KM “Perkūnas” played for bronze medals. All the game KM “Perkūnas” boys were one step ahead. There were no enough time to change the result and team of “Tornado” KM lost this game. Real hell happened in the final game. It was not enough main time to find out the winner, so DSN Riga and V. Knašiaus KM had to play overtime. Team from Klaipėda didn’t want to give away the vicotry, they won overtime 10:3 and became champions of tournament. 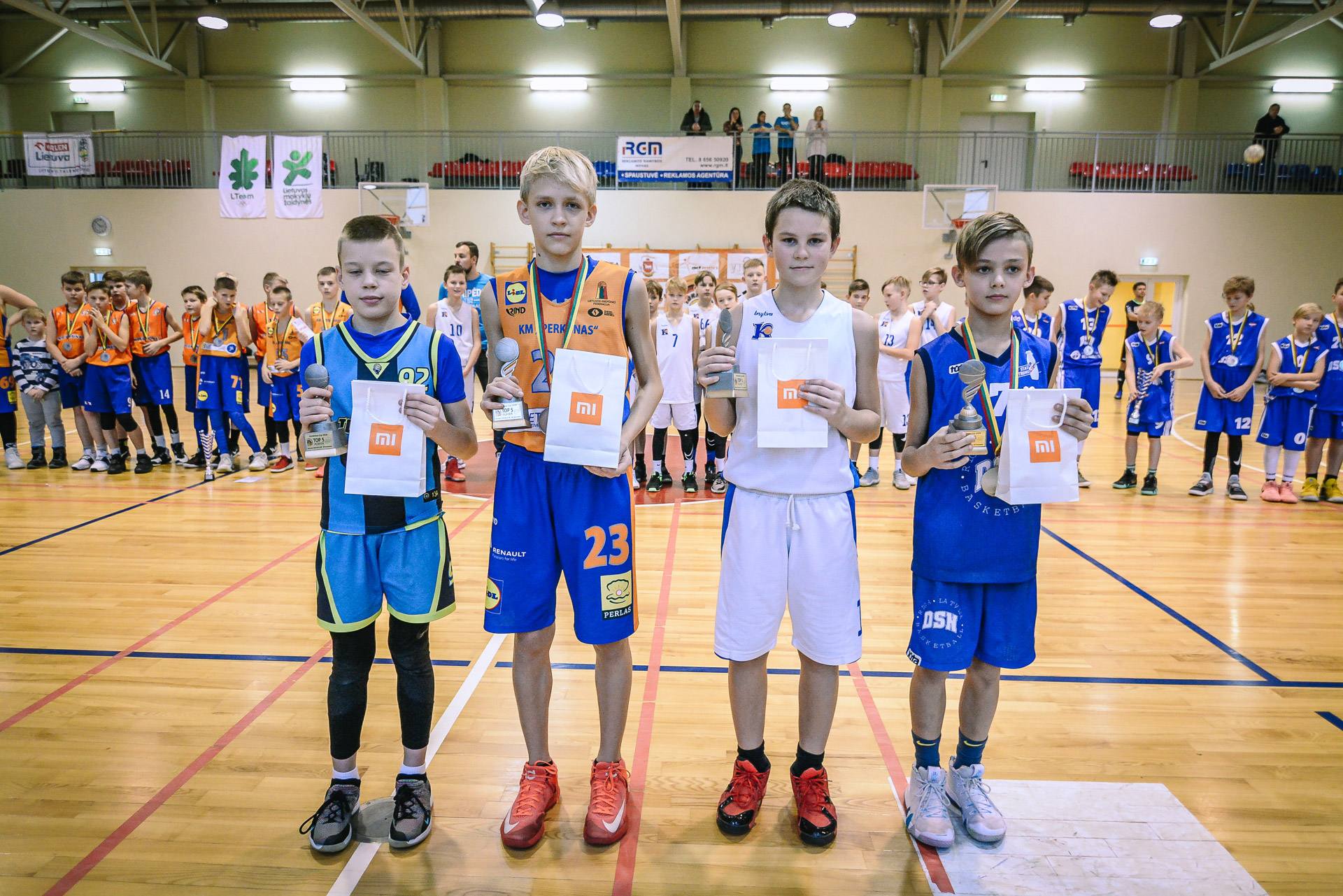 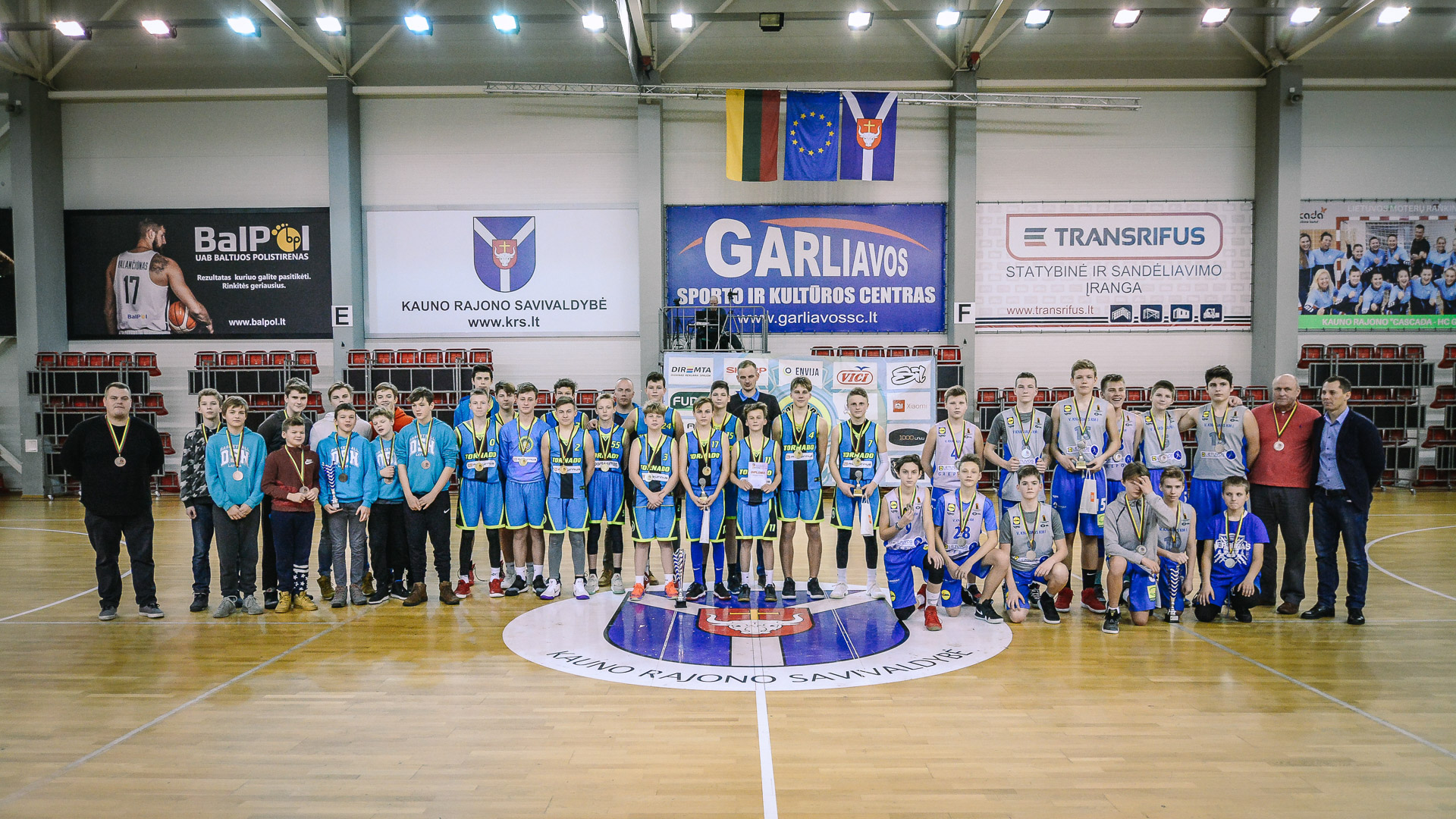 Eight teams played in group 2005. All teams were divided into two subgroups. Teams that took first two places continued to fight for medals, loosers left to fight for 5 – 8 places. Tornado KM – “Alburnus” and Biržų SM played in the first semifinal and V. Knašius KM and Riga DSN played in the second semifinal. After losing semifinal games, Biržų SM and DSN Riga met in the Bronze game. Guests from Latvia easily won this match and were awarded with bronze medals.  Tornado KM – “Alburnus” and V. Knašius KM fighted for the title of champions. Final game was very tough. Boys of Tornado KM – “Alburnus” had an advantage of few points, but players of V. Knašiaus KM tried to change that situation. Players of Tornado KM stayed concentrated till the end of game and celebrated victory. 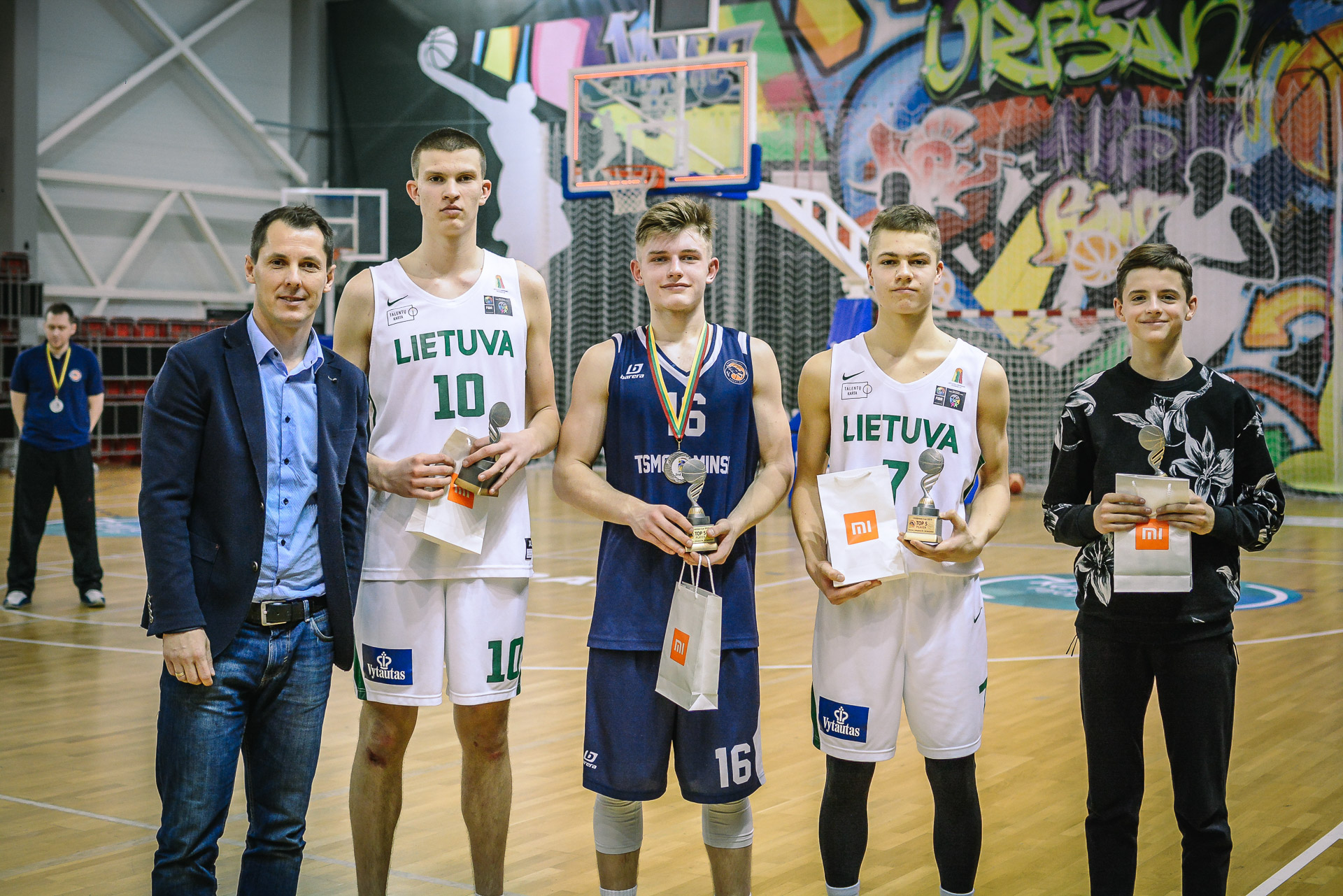 game and were awarded with bronze medals. Seems Lithuanian National team U15 will win easily final game, but Belarusians all the time try to change the result of game. They attack and play precisily, but however Lithuanians were more concantrated and became champions of group 2003.

„We are happy that we managed to organize the most massive international youth basketball tournament in Lithuania again, – said director of “Tornado” basketball school Dainius Čiuprinskas. – There were really high level teams in all age groups, so both players and coaches had a great experience. We would like to express our special thanks to Kaunas District Municipality for the opportunity to organize tournament in their sport base and for establishing awarding, also for sponsors – Mi Lithuania for the prizes for the symbolic five players, as well as for other sponsors, parents and the school staff  for the great help through the tournament. We wish everybody to gain as many victories as possible and win first places in their national championships”.

The most beautiful moments of tournament ⇒ Tornado KM Youtube 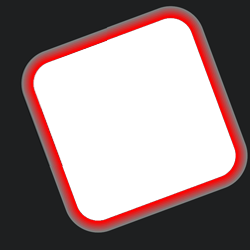 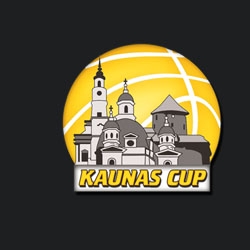 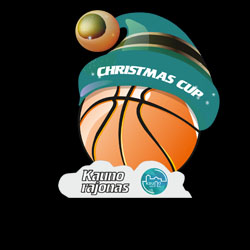 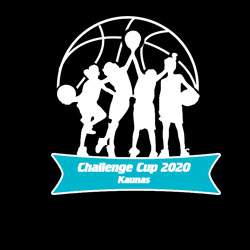